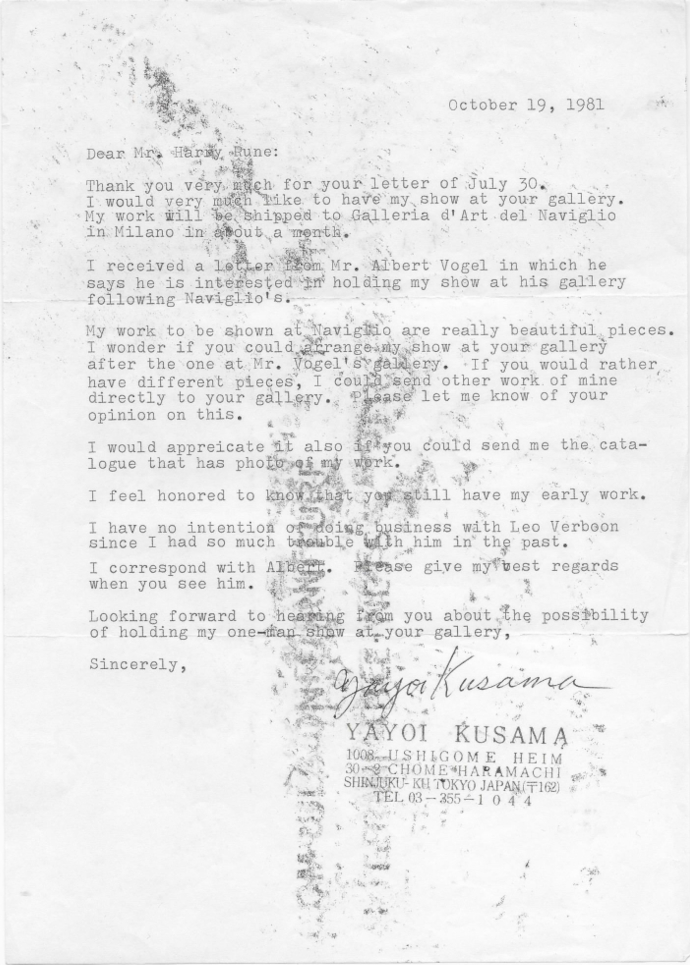 An exhibition that made a lasting impression on me took place in 1968 in Gallery Mickery in Loenersloot, a village in Utrecht province. Japanese artist Yayoi Kusama had previously gained nation-wide recognition with her decorating Jan Schoonhoven’s naked body with lots of colourful dots.

Kusama was now displaying ‘objects’, for example garments covered in dough and spray-painted gold and silver. Several household items overgrown with phallic forms of textile were also on display plus a tree of several metres high, made of gloves ….

I was determined to buy something and eventually decided upon a ‘penis-bag’ striped in yellow and black. If I remember correctly, it cost me seven hundred guilders. The Kusama show kept intriguing me and I paid another visit to Loenersloot a few weeks later. This time I bought a coat decorated with plastic flowers and spray-painted in bronze. By the end of the show, gallery owner Ritsaert ten Cate delivered the artwork to me personally in Oestgeest, where I worked at the Endegeest mental institution.

My Kusama collection kept growing. One of her bronze coloured ‘shoes’ was for sale at the Amsterdam gallery Seriaal. It was priced at two hundred and ninety guilders for an extended period, until it was reduced to a hundred guilders. I bought this object as well.

Leo Verboon of Gallery Orez in The Hague contacted me shortly afterwards; from his stock he had dug up a few prints from the Aggregation Boat Show series. Kusama had used prints like these as wallpaper for an installation during the 1965 NUL ZERO show in the Amsterdam Stedelijk Museum.

Kusama had taken notice of my regular purchases of her work. Once I opened a gallery in 1976, she started sending me catalogues and photographs at regular intervals and also informed me that she was interested in hosting an exhibition there. One day I received a big envelope with photocopies of stories about her work. On some of these reviews, some of which were in Japanese, she had written her name with red felt-tip pen.

Over the years I kept buying and selling her work. A solo show, however, never took place. Kusama had a reputation of being difficult to work with; I had heard some especially alarming stories from Leo Verboon. Still, this can be a common trait among artists and has never been a reason for me to refrain from an exhibition. In retrospect I am surprised that I did not accept her offers.

When I recently decided to reread her letters I realised that she had even offered to pay the fee for transporting her work from Japan to my gallery.

On October 19th, 1981 she wrote to me: I wonder if you could arrange my show at your gallery. (The fact that the letter was kept for forty years between Kusama’s photocopies did not improve its condition.)

And on January 25th, 1982 she wrote: I wonder if there is any chance of having my one-man show at your gallery. I can ship my works for the show from here with shipping cost paid by me.

Had I paid too much attention to Verboon’s stories? 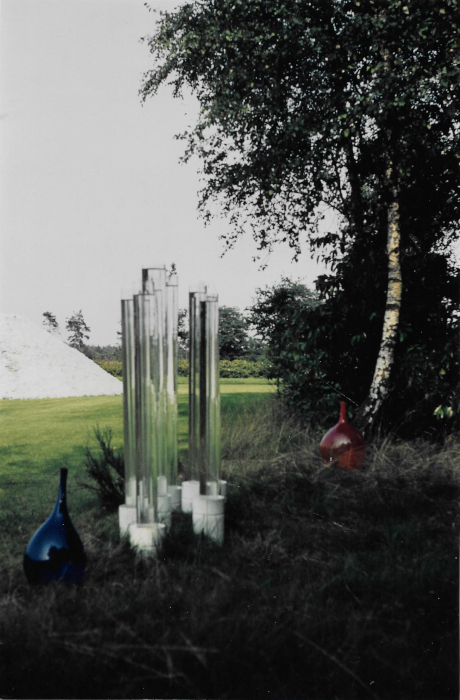 In 1965, a special presentation of glass objects took place in Bergeijk (a town south of Eindhoven) with the motto:…
Read more

Endre Tót The Hungarian artist Endre Tót was one of the most interesting Mail Art-artists of the 1970s. He used…
Read more